Westchester is at the crossroads of Miami Dade County on SW 87 Aveue or Galloway Road and SW 40 St or Bird Road. A thriving and growing community of over 100,000 with plenty of things to do. It is the strategic location for rapid transportation.

Many people beat daily traffic utilizing the elevated transit systems – Metrorail and Metromover.  Westchester has direct access to the Interstates from Bird Road leading you to the most important areas of the county, Miami International Airport, the Port of Miami , Downtown and the Beaches among many others.

In 2016, the addition  of the Westchester Circultator, Westchester's own bus trolley system, a frequent local circulator – provided convenient stops throughout the residential and business districts of the community. Today it continues to be a popular transportation component of the community. Addtionally, the new and innovative, car sharing system use in other areas of Miami, would be a great addition to the Westchester area.

The Westchester Maimi Dade Chamber of Commerce works as an advocate of mass-transit with various governmental bodies. It was instrumental in the creation of the "Westchester Circulator" trolley system, which has been in an increased ridership mode since its inception.

Click here for more information, including route maps and hours of operation.

The Metrorail system is a 25-mile dual track, elevated rapid transit system that runs from Kendall through South Miami, Coral Gables, and Downtown Miami; to the Civic Center/Jackson Memorial Hospital area; and to Brownsville, Liberty City, Hialeah, and Medley in northwest Miami-Dade, with connections to Broward and Palm Beach counties at the Tri-Rail/Metrorail transfer station. The 23 accessible Metrorail stations are about one mile apart, providing easy access for bus riders, pedestrians, and passengers who are dropped off and picked up.

The Orange Line – A direct link from Downtown Miami to the Miami International Airport
Since the Grand Opening of the spectacular Miami International Airport Station and the launching of the Orange Line, Metrorail has become the most affordable choice for getting to and from the airport. Local residents headed out- of-town can now leave behind all the traffic and parking hassles that come with driving to the airport. And out-of-towners at the airport have the best of Miami-Dade County’s attractions and activities in easy, affordable reach.

Click the link below for more information, including route maps.

The Metrobus system provides service throughout Miami-Dade County 365 days a year. Service is available in Westchester on the Bird Road Route 40 and the Coral Way Route 24 respectively. Connections to and from Miami Beach and Key Biscayne to West Miami-Dade, as far north as Broward County and as far south as Homestead, Florida City and the Middle Keys is available. Designed to intersect with Metrorail and Metromover, MDT's bus system serves all major shopping, entertainment and cultural centers, as well as major hospitals and schools.

Click link below for more information, including bus schedules and routes.

​WESTCHESTER AT A GLANCE 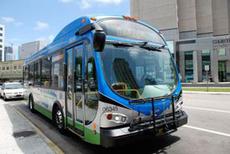 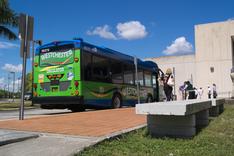